Should I Pay Attention To Or Ignore My Business Competition? 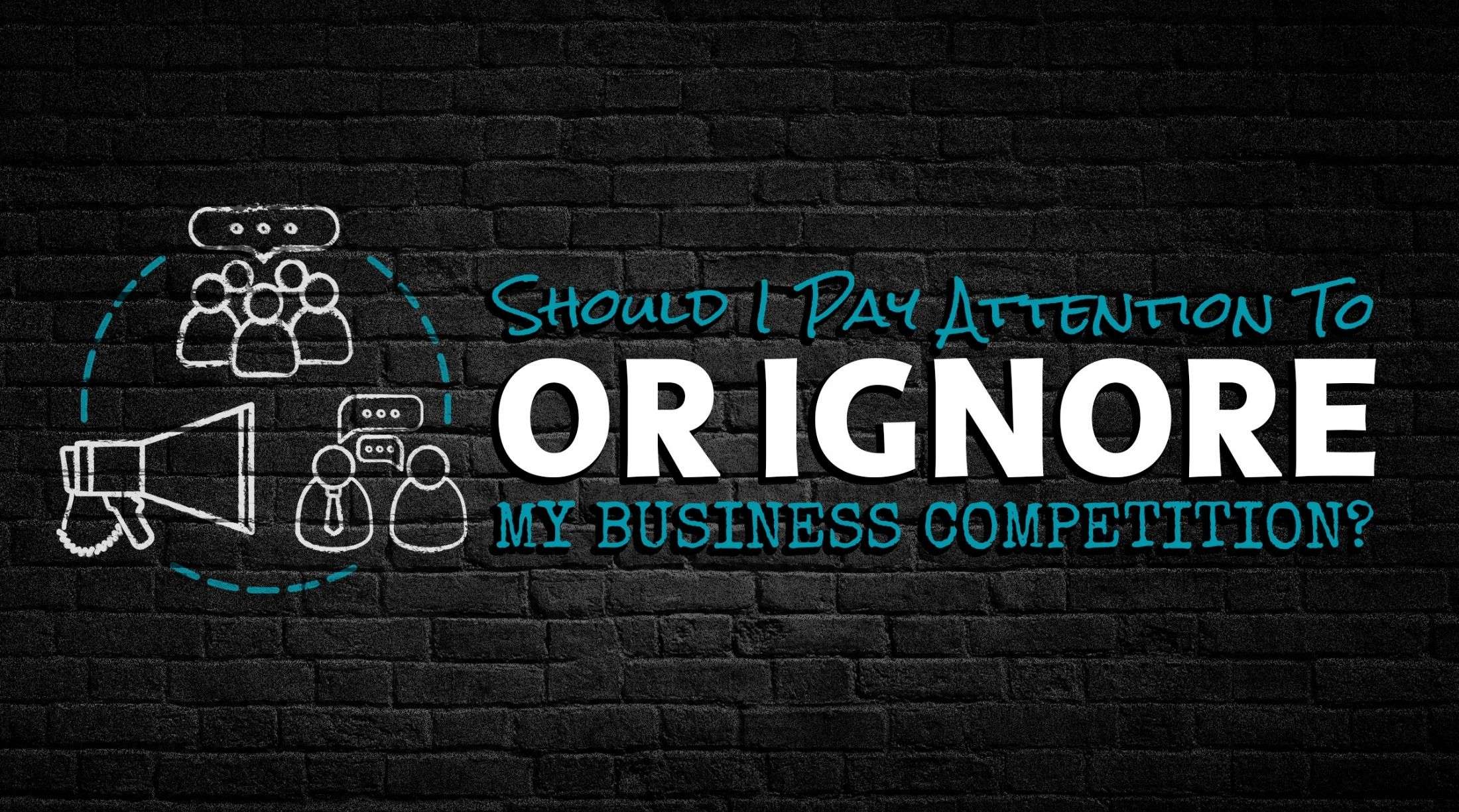 If you’re an entrepreneur, you’ve probably been told, “Don’t pay attention to what your competitors are doing.” But I think this is bad advice. Now, I get why this is a popular notion, but I want to share why we shouldn’t be following this advice and what we should be doing instead.

If you’re an entrepreneur, someone has probably told you, “Don’t pay attention to what your competitors are doing.” But I think this is bad advice.

Now, I get why this is a popular notion. The comparison game traps a lot of entrepreneurs. But I want to share why we shouldn’t be following this advice and what we should be doing instead.

How does FREE lifetime access to ALL of my online courses sound? There are courses on marketing foundations, legal foundations, financial foundations, messaging, email marketing, list building, and branding. I’m even working on more courses to add. Just click the link to sign up.

Why We Don’t Want To Watch The Competition

I’ll be honest with you, I used to think that the advice to put blinders on and not pay attention to the competition made sense. I did it for a long time, but then I started asking myself questions.

So, where does this avoidance come from? What’s at the root of the issue and why are we sometimes advised to do differently, ignoring the traditional wisdom that an entrepreneur should do competitive research?

It’s rooted in something that I’ll call “comparisonitis” that afflicts many online entrepreneurs when we watch the competition. It’s a “compare and despair” situation. In other words, we look at our competitors, assume that our competitors are succeeding, and that makes us feel bad.

How To Watch Your Competition

Instead of telling ourselves “don’t compare,” what we need to do when we look at what our competitors are doing is to detach our view from the compare and despair mentality. Here’s a couple of ways to do this.

Don’t Let The Success Of Other Discourage You

Finding that there are competitors who are doing the same thing as you and succeeding should not lead you to despair if you’re not successful yet.

Back in 2017, when I was struggling to build my online business and had my disastrous launch where I lost $25,000 and probably spent a total of $50,000, one of the things that kept me going was that I knew other online lawyers were selling training and templates to the people that I wanted to sell to.

My experience taught me that there’s a market. There’s hope. I simply needed to crack the code and figure out what it is that I’m not getting about the market that my competitors are in.

So, that’s the first thing I want you to think about. If you’re struggling and you look and see other people are succeeding, that’s a good sign. Clearly, there’s a market for what you want to do. You simply have to figure out how to speak into that demand effectively.

Understand How Others Are Competing

You should look at what your competitors are doing, not to copy them but to understand how they’re competing.

The goal is to gather ideas of what’s out there in the market. It’s not because you’re going to emulate them, try to be like them, or even try to compare your marketing to theirs. The point simply is for us to know what’s happening in the market and specifically, how people are competing.

You might have heard me talk about how I am very specifically carving out a very different space in email marketing because I see multiple people who offer templates as their freebie.

And if you’ve listened to me for a while, you probably know that I’ve been saying that templates are counterproductive for your email marketing because templates prevent you from connecting with your audience in a real way. That’s a stand I’m taking because that’s what I believe.

The important thing is that when I see that many folks are offering templates, that tells me that’s what a lot of people are asking for. So, it’s an opportunity for me to figure out how I view things differently so I can speak into what the market says.

Now, if I put blinders on and ignored what everyone else teaching email marketing was doing, I wouldn’t know that. I’d just be speaking randomly into a vacuum.

Also, if you have competitors who have podcasts, listening to them, especially the successful ones, can be incredibly valuable because you’ll figure out what it is that they’ve figured out. You’ll be able to see things like what it is in their messaging that contributes to their success.

This isn’t to say that you should copy their messaging. You shouldn’t do that because your messaging should be unique to you.

Work On Your Mindset

Ultimately, the problem is that we must shift our mindsets. This notion of “compare and despair” is learned. That’s not the automatic result of knowing what other people are doing. You choose those thoughts. You choose subconsciously, most likely, but it’s your mind that’s creating stories based upon facts.

The fact that there’s someone who’s successfully doing the same thing as you are doesn’t have to lead you to a place where you’re saying, “Oh, I’m a failure.”

What you need to do is work on that mindset piece. You need to figure out what it is that leads to that conclusion. Then you need to find a way to coach yourself out of that story that you’re building in your mind. You’ll have to determine what works for you.

You’re not going to succeed as an entrepreneur by simply ignoring everything that your competitors are doing, getting upset that they’re succeeding, or being mad that they’re challenging something that you believe. That’s what marketing is. People are going to look at their options and decide what they want.

If looking at your competitors is somehow going to lead you to compare and despair, that’s something you’ve got to deal with at the mindset level. To be successful, you need to have a pulse on the market. You need to know what is in demand and what your competitors are doing. When you’re tracking the big picture, you can sense and react to what’s happening in your market.

Don’t buy into the notion that you should put your blinders on and ignore your competition. That’s not a path to success.

Look at your competition, but don’t copy them. Don’t simply try to be a version 2.0 of someone else. Instead, watch what they’re doing, keep tabs on the market, and don’t let it get you down.

If by looking at your competitors, you find yourself sinking into a “compare and despair” situation, instead of pretending it isn’t happening, learn to deal with that mindset.

Keep tabs on your competition, but do the deep work to avoid getting upset and despairing over your competitors’ success.

If you’re struggling with the “compare and despair” mindset and want to make sure you’re building a solid foundation in your business, then be sure to join my FREE program, BADA$$ Online Marketing University (BOMU). You’ll get access to courses that show you the right way to build an online business – courses that others pay thousands of dollars for.

We use cookies to make this website as awesome as Cookie Monster. Some cookies help us understand how people use the site so we can make it even better. Some cookies help our site remember your preferences when you come back next time. And some cookies let us use targeted messages (rather than spamming everyone with the same message!).

This website uses cookies to improve your experience while you navigate through the website. Out of these, the cookies that are categorized as necessary are stored on your browser as they are essential for the working of basic functionalities of the website. We also use third-party cookies that help us analyze and understand how you use this website. These cookies will be stored in your browser only with your consent. You also have the option to opt-out of these cookies. But opting out of some of these cookies may affect your browsing experience.
Necessary Always Enabled
Necessary cookies are absolutely essential for the website to function properly. These cookies ensure basic functionalities and security features of the website, anonymously.
Functional
Functional cookies help to perform certain functionalities like sharing the content of the website on social media platforms, collect feedbacks, and other third-party features.
Performance
Performance cookies are used to understand and analyze the key performance indexes of the website which helps in delivering a better user experience for the visitors.
Analytics
Analytical cookies are used to understand how visitors interact with the website. These cookies help provide information on metrics the number of visitors, bounce rate, traffic source, etc.
Advertisement
Advertisement cookies are used to provide visitors with relevant ads and marketing campaigns. These cookies track visitors across websites and collect information to provide customized ads.
Others
Other uncategorized cookies are those that are being analyzed and have not been classified into a category as yet.
SAVE & ACCEPT
Powered by